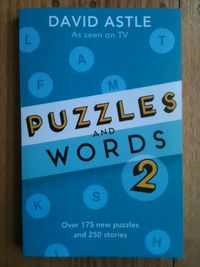 A simple comp, like one we ran two years back. As 2013 winds down, and a snoozy summer awaits, your challenge is to cook up a neat Storm idea, or something for Friday Folly. The best in each category will win a copy of Puzzles and Words 2.

So what makes a good Storm? Often an interesting clue exercise, such as making wordplay for a curious set of names, focusing on a clue style, applying a recipe twist, inventing a theme. Or maybe something non-clue, asking players to take a creative leap (make a neologism, contrive the best anagram, unearth the prime example of a rarity etc).

As for Friday Folly, this is more the shallow-end pursuit. Popular follies in the past have included failed idiom, random book titles, name tweaks, manipulated movies, edible celebs. Throw your imagination to the task, and let’s see who can conjure up the best example in both categories, giving examples where the challenge may not be fully clear.

This contest will run until Tuesday 5pm, where I’ll play sole judge and jury to announce the two picks before the crossword centenary next Saturday. PS – to keep things above board, pick two aliases (a tempestuous one for the Storm category, a zany one for the Follies), which may see you win both books! Good luck, and thanks in advance for some classy new-year ammo.