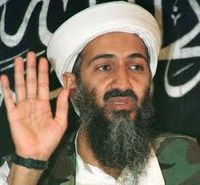 Ding-dong, Osama is dead. Allegedly. Buried at sea somewhere. With fishy pixels to capture his torched visage. So there. QED.

Whatever the truth, the fugitive was girt for much of his time in downtown Abbottabad. Though any crossword fiend could tell you that OSAMA had long been lying low in the phrase mimosa man, or Morocco’s amazing. Or maybe now he’s gone – maybe: Adios, a maniac.

Since that’s this week’s Storm. To pick a famous name – alive or dead or in between – and bury them in a string of words. Surgeon VICTOR CHANG, say, crouches inside the sequence pelvic torch hanging. Another doctor is found up a stiff red hollow sleeve.

For those who have read Puzzled, MARTIN AMIS reclines in the feasible epithet of smart, in a mischievous vein. The best examples will be those phrases that somehow invoke the name you’ve chosen. And failing style, length. The Argentine amazon GABRIELA SABATINI is tucked into the nonsensical string of bring a brie, LA’s a bat in it.

If a person’s full name is too much, then go with surname only, assuming it’s distinctive, and tricky to conceal. No need to identify your choice of name (we’re bound to uncover it). Instead, just give us the enumeration, like a standard clue – minus the definition element, with a hidden indicator optional.

Any other ground rules? Dunno. They may well evolve as we file. Below are two more to tickle your brain. Find the two stowaways, and then let’s see what you’re hiding. (Deadline by Thursday e'en.)