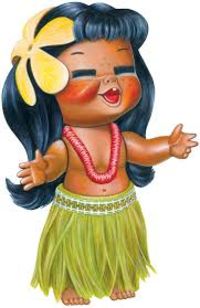 The Hawaiian alphabet has just 17 letters, from A to W, skipping the likes of C, G, J and other Anglo favourites. In fact, rather than listing what's missing, let's see those 17 in one Polynesian block:

Can you see where this is going? Uh-huh, we'll be assembling words only built with these letters - and making cryptic clues only using these same seventeen.

Say you made LOIRE out of this block. Straight away you're prevented from mentioning French or river or flower in your clue - though you could say:

Bonus points for choosing a word (and crafting a clue) with an Hawaiian flavour, and I don't necessarily mean ham and pineapple. Here's one bid:

Have fun in the sun.