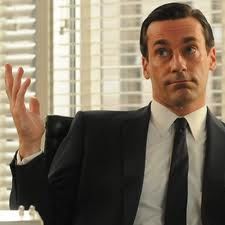 Ben Schmidt is a Princeton history grad with a bent for pop culture. Ben in fact has a very cool job, as fellow at the Harvard Cultural observatory: a bit like Gotye meets Galileo.

Though the stuff to really catch my eye is Ben’s work with words out of time, in particular the language used on Mad Men and Downton Abbey. Check out his blog Prochronisms to admire the degree of scrutiny.

Ben will feed each episode’s script through a time-senstive piece of software to create an inky language-cloud, where the density belongs to period phrases, while the outliers are historical booboos. Focus group, say, was not a thing of 1965. If they did exist, they went by another label. Same goes for on hold, or callback, or big deal.

Subtle stuff too, like huge favour, you OK, say hi and wearing makeup‘ Even Ben’s own station in life – grad student – was not a said thing in 1965. Mouse around and marvel at the mishaps, and proof of how quickly English can evolve.

What about you? Enjoying a show lately? Heard a phrase that seemed out of place? Our out of class, or culture? When Lady Crawley utters bad hair day on Downton Abbey, you know Ben Schmidt will be all over it.