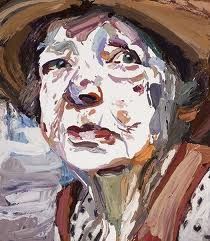 LEIGH SALES is a LEADING HOST AT LEAST, and a biobe to boot. That’s a verbal gewgaw where the person’s name is dispersed left to right in the person’s caption, just as ALI G is ADDLING (Nib), or a TENOR WITH MOJO – THROW PANTIES (SB) just has to be TOM JONES.

To pick the prime biobes, I ruled out those that carried one too many letters, like Peta’s AL GORE (FALLS TO GEORGE (from Peta) or duplicated words, like the PRS epiphany for THE BEATLES: THE BEAUT MELODIES. Fidelity was the other touchstone, since ANDY LEE is not a RANDY SLEAZE (one on my drawing board), though IVAN MILAT could say I’VE AN ABOMINABLE PAST (LR). Such rules of thumb opened the way to some brilliant biobes, with the best kept till last:

IAN BOTHAM – Giant bottom hams [RV leads the charge from the rear, if you follow my drift]

BANJO PATERSON – Bard enjoyed poetaster songs [A fine biobe, with a tricky J no less. Nib can be consoled to hear he went close to the podium with this guy.]

WILLIAM SHAKESPEARE: Swilling malmsey, he makes up theatre [Impressive hit-out from RK, who dared to dream with a name of 18 letters….]

BING CROSBY: Being croons ably […and then made shorter work of the Bing.]

CHARLIE SHEEN – Charm, lies…the end [Exquisite work from SK that tells a tale from limelight to afterlife. He shares the silver…]

But I couldn’t ignore the technical genius, the topicality and the ha-ha cachet of LR’s SHANE WARNE [Shags new partner]. An obvious target, you may argue, but this biobe is brill and this week’s gold medal snagger. I’d even glanced at Warney in the early phases, and couldn’t see what LR found. It’s a tabloid knockout.

Thanks for the homages, the muck-raking, the punchlines: a dazzling biobic debut. New Tempest next week, after Trincolo’s final Tempest tonight.