Can We Pip The Poms? 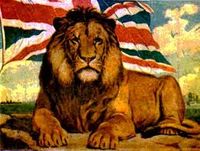 Scouring my clue-banks, those wordplay gems collected from UK puzzles, I found six stand-outs from 1995 which I don’t think can be bettered. Or can they? That’s the gauntlet that’s been tossed your way this week.

Here’s the game. Below are the six answers which you’re invited to clue. But rather than hiding your ID under a bushel, or working at odds, I urge you to gang up and make the best clue possible for each of the six. Naturally I will help where I can (as I’m off-site this week – and do know the rival clues), but come Thursday, before 9pm, let’s aim to nominate our favourites (one for each word – plus two reserves as leeway). And by all means, do your voting and discussion in the open forum.

That way, when I release the UK zingers on Friday morning, we can contrast and compare the cream, and see which ones truly rise. (I’ll try to cut and paste the Pom and Dabbler versions in the Friday forum at least, just to help with the debrief.) Sound a good dare? Let’s do it!