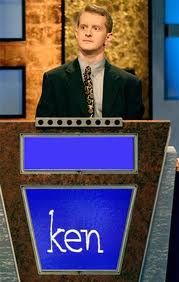 This head-scratcher comes from the King of Trivia, Mr Ken Jennings – the Mormon maven to win 74 straight episodes of Jeopardy.

The puzzle is based on naitons that can lose their opening TWO letters to spell a new word, such Sweden offers Eden, or Iceland (and Ireland) hiding eland.

Fair enough. But Ken’s breezy list on his hyper-blog was concluded by four stormy clues. Too hard for Tom, Dick or Harriet, but just the kind of brain-strainers for you lot, and a Conundrum. See how you fare:

Your wisdom is welcome. And what other nations can you recruit?