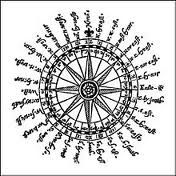 Our two-direction Storm went 134 directions last week, or that’s the post tally we racked up, a record for this blog I believe. So thanks for such an inventive frenzy – and the pleasant burden of naming our Kings & Queens of the Compass.

Given the scale, and the quality of ideas, I thought it best to split the end-game into two podiums, or podia if you’re feeling Hellenic. The first recognises some whip-smart manipulations, while the second is all about the coolness of the clue. That done, I will single the Stormer to master both. Here goes:

Gold: Gnarly sound, this Arabian = WEATHERED SEA (THE RED) [Even for Mauve to weather his own musing to find this marvel. It’s an ancient wonder.]

Tied Bronze: Penn pen = SEAN SWAN [Who knew there was a homophone hiding in this compass challenge? JD is who.]

Silver: One Storm is as good as another! = EQUALLY SQUALLY [Soon as I read Lucasta’s clue, I was hellbent to get the answer. It’s provocative, apposite, vernacular – with a glorious payoff.]

KING/QUEEN OF THE COMPASS:

For a clever, conspiratorial clue, with a wicked answer, the crown alights on Lucasta’s pate for this piece of business:

Funny, elegant and worth a fuss. Congratz Lucasta, and all medallists. (Or maybe you saw the entries otherwise?) One thing is sure: this direction Storm off the map. Bad luck if you missed the cut – with RobT’s NICKED WICKED (scored musical) only needing a shortlist, and newbie Floyd is warmll encouraged to read the rulebook to make kosher mayhem next time. Personally I’m elated with such fine results slated.