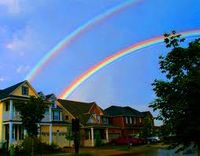 A. The letters AV can be jumbled into three of the rainbow’s seven colours, so making new words each time. Which three colours are enlisted, and what are the FOUR words that result?

B. THE RAINBOW, a lesser known novel by DH Lawrence, holds two verbs of similar criminality, where every letter is used once. (Or can you add two more consonants and scramble to make a relative?)

SOLUTION NEXT WEEK
BB426 SOLUTION: Fuming, brassed off, ropeable, seeing red, in a lather, incensed, cranky, fed up to the back teeth