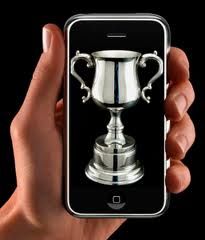 In the spirit of SMS brevity, I shall roll out the dozen i-pearls of yore, being notable notes of history and pop culture. Over ten Dabblers sent in more than 70 electronic messages, from Christ to Churchill, form Peron to Lurch, with this shortlist the surest of a good lot. Meanwhile the last bunch are the bottlers with virtual medals – ( ) – to prove it:

XTRMN8! — Every Dalek SMS, ever. [Geoff B makes a deft debut]

U TXT? – Lurch joins the 21st century, via Em’s inspiration.

U TLKN 2ME x5? – [RobT channels the a bit of Travis Bickle aggro]

F N APL (Have an apple – Eve to Adam. A timeless temptation from JD)

And a poignant grab on Golgotha, scooped by RobT: YU 4SAKEN ME? CYA X (Christ, J.)

But the Gold ( ) recognises the steady sass of Em who owned this week’s Storm by ransacking film, folklore and tabloid history. You’ve already seen a few of her gags, but these three are a killer combo:

Big thanks for such a riotous colloquy, an idle whim you lot wangled into a trove. As for next Storm, I can feel a clue-comp brewing. Till then.