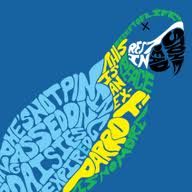 Despite reports, the Norwegian blue parrot is not dead. If you stare into cyberspace long enough, you may hear the creature tweeting, along with DA’s new chirps on the twittersphere. I’ve just enlisted in this new network, and invite all Dabblers to make the leap. If you’re a tweeting Dabbler, the leap’s all but made for you. Your homepage away from home is known by dontattempt. So head for Twitter, and look me up sometime.

In further news, look out soon for the whiz-bang polls and leaderboard, the new alignment and forum tidy-up, as well as a funky anagram animation by the Ice Lab team. As things kick into gear, your feedback is welcome, though happily this new sweep of tweaks is abiding by many of your initial responses. Feels like a spring-clean three days late, but no less rejuvenating.