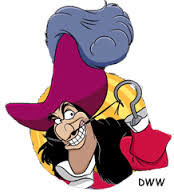 We had Riff and Ahab, Peter Pan and Hoffman, Panache and Deep Fine Leg, Jay and Southpaw. That last one was me, but I had no clue whose clues are whose when picking the best clue from the Henry Hook playbook.

There was plenty to like in the shortlists, from Pater Pan's 'caught in the headlights' (to signal external Os) to Ahab's AMIN IS SIMIAN.

As a general note, next time I run a comp, please ensure you supply parsing notes for your more ambitious clues. It helps to elicit your latent genius!

So in a break from the usual prize-list read-out, here are Henry Hook's actual clues, followed by our own creative book-hooker:

APOSTROPHE - Develop spare photo as a sign of ownership?

AGATE - Shooter with a gun, empty

ALOES - Lilies from ballooners, not oddly

CAKE - Dessert made with a variety of vitamins

SIMIAN - Lost soldier taken in by sloth, perhaps, or monkey

OHIO - I caught you hiding piece of information in a state

IF NOT - In different circumstances, it includes f-number

So let me know who you are, and where you're at (via email), and Mr Hook's puzzles will be wending their way. Thanks for the HookBook cookery all players.