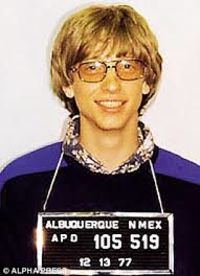 Blame Mauve for this Storm idea. The occasional contributor, and inventive cluesmith, recently sent me a batch of clues involving names. One I shared in this week's WoW forum:

The answer (I eventually twigged) is ADVERTISING, an anagram of GATES + DRIVIN. The straight clue, of course, is Bill. Since that's the challenge at the heart of this week's Storm, to present a name that seems inviolate - a single ironclad unit - which actually needs dividing in the clue's parsing.

Complicated? Mauve was kind enough to send other examples:

You get the drift. Pick a name where one part can serve a definition role, while the other is implicated in the wordplay. See who can engineer the sweetest split. My start: