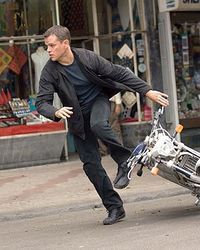 As this new domain marks a sequel to Cassowary, let’s engage in a Storm of the same kind, turning one production into a trilogy.

Take Mad Max for example. That movie was followed by Mad Max 2. And finally Mad Max Beyond Thunderdome.

Or turn your gaze to Jason Bourne, who scrambled and somersaulted through the hoops of Identity, Supremacy, and ultimately The Ultimatum.

Philip Pullman dazzled in his Dark Materials trilogy, where a Golden Compass makes way for a Subtle Knife that lastly points to an Amber Spyglass.

But imagine any one book, or movie, is Part One of a trio. Can you speculate on the two sequels around the corner? Say Muriel’s Wedding wasn’t a dead-end, but the first step of three-step plan. Could the next two films be Muriel’s Settlement, then Muriel [Heart] Rhonda?

Or what about: Green Eggs and Ham, O The Hospitals You Will Go To, Sam He Was?

And should you stumble on a double, where two books/films have been created, but not a third, then add that final piece: Babe, Babe: Pig in the City, Kransky.

That’s your challenge in this domain debut – to trilogise. Which isn’t a real verb, but what say we make it a surreal one this week? In the name of relocation, the Storm will last till late Friday, giving wayfarers and regulars a chance to get their new bearings. Get extensive.