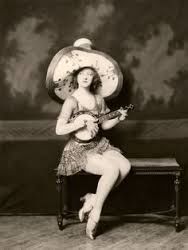 Fresh from this week's contest, where our minds have been meddling with celebs into the wee hours, I thought we could extend the trick with a Friday anagram folly.

The trick is mixing a person's first name with their surname's initial, so creating a word - or other name. Folk queen JOAN BAEZ, for example, can produce BANJO, which could inspire the clue:

Just as Oz actor's iodide could be MICHAEL CATON CHEMICAL.

Have the hang. Let's see how we fare without supplying answer lengths, but keeping our clues relatively uncryptic. Comic, sure. Oblique - no worries. Just not pretzel-like in the creative logic department. Here's my opening sample:

DA2 - Did she cover Tapestry?

Pretty tricky I'm guessing. Let's see how we swirl, creating your own, with byline and clue numbers to make the getting easier to track.