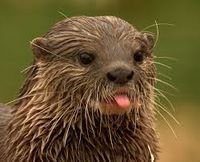 If you haven't been following our latest forum, turning otter shit into gold, then head for SPRAINT just below this post. There you'll find the cool in lutrine stool.

You'll also encounter this Storm idea, hatched by SK, furthered by jpr, and now available for all clue-mongers to amplify. The idea involves splicing, based on SK's devious clue for SPRAINT:

To parse the trick, try:

Again, the clue entails splicing the wordplay with definition, like so:

To etch the formula in memory, SK added ANTECHAMBER:

Can meat with herb, mushroom

So that's our clue-crafting peak to scale this week, dabblers. Because it's there. Because it's a superb idea. And because someone will own bragging rights by Friday if they create the perfect splice. Let splay.