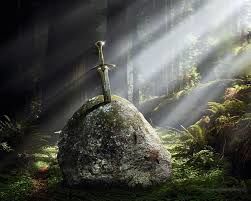 This week's Storm is more a Meh post, where we debate the merits of some so-so Brit clues, as well as seize the chance to create our own clues for the same 7 answers. But first to the so-so. Do my list of plaints hold water, or am I betraying my inner curmudgeon?

2. Tree associated with common colour = LIME GREEN [I rekcon Brummmie has succumbed to a hookworm here, as limes are lime.]

3. Part of play, playwright clutching opening to act – he covers the background in theatre = SCENE PAINTER  [Hookworm #2 with Tramp, as scenes are indeeds part of a play, hence a scene painter.]

4. Crashing bore very sensitive about conflict = BOER WAR [Unwise I reckon to make your anagram a homophone of the answer. From Times 10679]

5. Two men in kingly legend = ARTHURIAN [Worst Times clue of the year, from the above puzzle.]

6. Report firearms having been stolen = GUNSHOT [Another Times clanger, hate to say]

7. National newspaper = SCOTSMAN [And the newspaper is named after...?]

8. One is in nave, wide-eyed = NAIVE [Dare you to create an easier cryptic clue, more facile than Otterden's offering. In fact that could be our Storm: who can out-simple this simple cryptic?]

Keen to get your feedback, and your zestful alternatives.