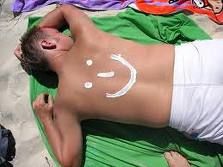 Back from the beach – tanned twice over.

But first, a big thanks to all you wry-minded regulars for keeping this site so abuzz. I’ve been following your invention from a niche near Eden, swimming in your wit and energy. By the same token, it’s been nice to pause, gorging on books and harvesting new ideas.

And just like my Clinique Sun Block, the formula worked. Have returned to the Word Cave this morning laden with new stuff for 2011 – for you bloggerati, for the puzzling public, for columns and Wordwits, as well as the Letters and Numbers fans. Stuff like what? Well:

But let’s get back to that double tanning. What did I mean? The first tan was orthodox. It came courtesy of the South Coast sunshine. The second? That was administered by the general public due to my LITTLE CREATURES crossword just been.

Some of that birching was deserved too. The idea was cute (a saloon whim, no surprise), and the pay-off was extended, though my error in 19-Down (neglecting to account for MAN-HOUR’s H was abject), while the double-loading of capsized in the main theme clue was ambitious, to paraphrase Dennis Commetti. Too much for such a pivotal clue. And if none of this makes sense, no matter. Just skip ahead to the final paragraph.

But for those in deep, and habitual DA solvers, I’m beginning to think these mega-tricky crosswords (those that ask you to manipulate answers, or decode other treacheries) may be misplaced as a general Fairfax feature. The Monsters are too monstrous, it seems. Every new twist fills the editor’s sack with complaints. But where and how can I keep such puzzles on offer? A monthly feature, like the Guardian’s Genius? A different forum? Feels like a puzzle to solve in itself.

In the meantime, a happy 2011 to all comers. Here’s to a fruitful, hoot-ful year, where every word yields the ideal clue, every pun a smirk and every anagram a rousing aha. So let’s crank the wordplay up to eleven, and may every conundrum bring contentment.