Ogre in a Toga 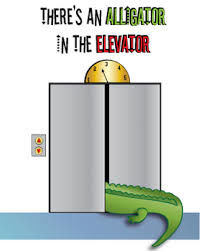 Received a Folly idea from the splendid setter in Anax, otherwise known as Dean Mayer. (And please feel free to send along any Storm or Folly inklings that come your way.)

The game is simple. Your answer must pivot on two rhymes, with 'IN A' in between. Lewis Hamilton, perhaps, could be a STAR in a CAR. An ascending reptile could an ALLIGATOR in an ELEVATOR, while new signs of Russian poverty, maybe, could be BREADLINE in a HEADLINE.

As you can see, 'in an' is OK. As well as 'in the' - so long as we stick to the preposition, and simplicity of the rhymes. To signal your clues - with initials and number - please provide each answer's initials. My opening half-doz:

So guys - what else can we devise?