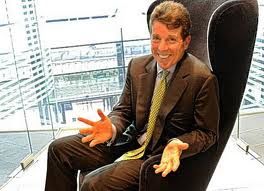 Finally there’s a word for those senior execs – think Barclays Bank or Enron – who receive a swollen pay packet, and act with smug complacency, despite the glaring evidence of their incompetence. Are you ready for it?

That’s among my favourites in a sprawling list of possible new words. Another is a catch-all term for vain, dim, anti-reading narcissists: ILLITERATI. And I kinda like WORDYCUFFS too – being a heated verbal exchange. Or YARB: one who talks about their job too often.

You can find the list over at the Collins Dictionary, with the details of the competition, and how to win a daily prize for the smartest submission. (The harvesting runs until August 31 – so give the challenge a decent chew.)

Regular Dabblers will recall our own neologism contest, back in November, where the likes of Em, SK, Sam and KM all won plaudits for some ingenious coinage. I can only urge those same four players to launch their creations into a wider world – and win a gewgaw for your troubles.

In the meantime, here’s a challenge. What’s an action, notion, trend, object that sorely lacks a name? Add your inkling to the Comments and see if we Word Doctors can’t fill the void. Here are two I’ve recently received:

Any takers? Any other gaps in need of grouting?