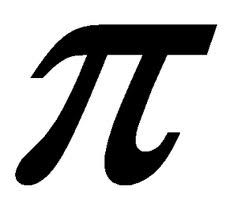 Keeping to a letter/number flavour this week, I’ve been chewing on pi, that old Greek letter that meant so much to Pythagoras and every other digital freak to follow. Most of us knew the symbol to mean 3.14 (or roughly 22 over 7), although the actual value is impossible to finalise, since the irrational string of numbers spills into infinity and beyond.

In fact, breaking pi down to 20 places, you get this catchy non-numberplate:

(Of course, you say. Recite it in my sleep.) But how to play with this mystic sequence from a word perspective? That was the real question. And then I had an Archimedean eureka.

Too clunky for a Storm, but let’s see who can compose the most lyrical sentence(s), using as large a grab as you like of that 20-digit string, where every word owns the equivalent length of the numbers on show, and every number observes the correct order. For example, using the first clump, I fudged this attempt:

For a nerd, I think, chemistry is mostly bliss and boron.

As you’ll discover, owing to the erratic numbering, this challenge ain’t easy. Even that 3141 opener is a hair-puller. But then again, what else do you expect from applied maths? A Fulbright Genius Grant to any dabbler who can compose a single fluent sentence to 20 places.