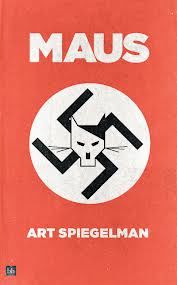 When I was a kid I followed the Roosters – the Monkey Mayes and Russell Fairfax era – but then the zonal logic of my own North Sydney Bears stole my teenage heart. Only for the evil Sea Eagles empire to engulf the hapless Teds. Since then, it’s been a Storm affair, and any-team-thats-not-Manly. So well done, not-Manly. What a sensational GF.

Now I can restore some reading time, as I’ve lost interest in cricket, and the gee-gees don’t quicken the pulse. (Tennis for two weeks is a Hollywood diversion.) What about your sport fix? Do you have a season of barracking?

Melbourne crossword fans can grab two chances to get some DA in person. This Friday you can join me for some prize-games of wordplay at the Mind Sports Festival, in Murrumbeena. While on Sunday, October 27, I’m launching Cluetopia at Readers Feast, in the city. Both promise ample haha & aha.

I’m also looking forward to meet Mr Maus himself, Art Spiegelman, who is here in Oz to deliver his address: What The @#^*! Happened To Comics? Art is dropping the 774 ABC studios this Tuesday, to chat with Jon Faine and me on the Conversation Hour.

For those not on Twitter, you missed a brilliant game called Add A Word Ruin A Movie. Sublime suggestions included The Sperm Count of Monte Cristo, Pretty Ordinary Woman, Sex Toy Story and Finding Nemo Dead. I’m wondering if we can play: Drop A Word Ruin A Movie? Possible? Dunno. Feel free to kick off.

Enjoy your wordy week. And the best of Brit crosswords, also celebrated here.