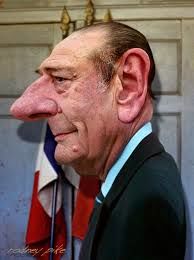 Raking over some Wordwit archives, I came across this little game from 2007. As you’d expect, being a people puzzle, the names are a little dated.

The challenge is audio, where you turn a well-known person into a string of sounds. The folly’s title – SHARK-SHEAR-ARK, say – is the sound of Jacques Chirac, just as former F1 driver would be SHARK-FILLER-NERVE.

So then, here are a few more audio celebs from 2007 (some of whom are still around). Can you solve them, using the clues? (Note: the first two are Australian, then 3 Poms, plus a mystery tail-ender.) And can we produce an updated list of luminaries?

Good luck. Not so easy to solve, these. Or make!