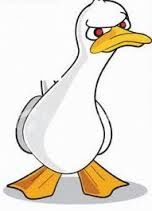 There's a long & vitriolic tradition in theatre circles when it comes to critics borrowing on a production's name to deplore or condemn the show. You know what I mean. This kind of snidery:

Chekhov's Cherry Orchard is the pits.

The Wild Duck is more bull than rush.

The Merchant of Venice deserves to be remaindered.

Yawn With The Wind.

No Country For Old Men, or Old Women, or Middle-Aged People, or Kids Either

At least, that was the tradition. Seems reveiwers tread more carefully, but let's bring the nastiness back, just for a folly. (No snipes will be held accountable, or actionable.) Choose a book, a movie, a play, and use its title as vindictive ammo against the work. Have some fun at an auteur's expense - for today only!