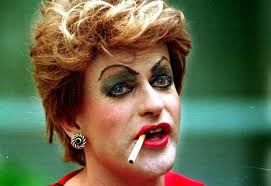 Starve the lizards – the small world of Australian letters is in a lather this week, a dinkum stoush in fact, with The Monthly critic Peter Conrad chucking the kitchen sink at author Hugh Lunn.

The gist of the barney is Australian slang. In Conrad’s mind, Lunn’s latest book – Words Fail Me – is a veiled attempt to preserve this nation’s parochial values, going so far as accusing the Queensland writer as adopting “the persona of a philological Pauline Hanson.‘ Like, ouch.

Lunn for his part has deplored the accusations. ‘'Peter Conrad has a bee in his bonnet without knowing anything about me,” he told Susan Wyndham in today’s Age. And yes, The Monthly can expect a defamation suit on its bull-nosed veranda soon.

The debate, as far as I can make out, dwells on the notion that old-time Aussie speak is either seen as:

(a) an important entity and identifier we’d be wise to preserve in a ever-homogenous village;

or (b) an embarrassing colonial hangover.

So where do you fall? Let’s not swap diatribes, or post-grad doctorates, but rather impressions in brief. Leaving behind the stances of Lunn and Conrad, how do you see homegrown idiom, and which phrases do you use – or hate to see lost?

Myself, I’m a sucker for saying ‘big woop’ and ‘rat’s arse’ – both legacies of the schoolyard – while this Chrissie, taking prezzies to Sydney, I’ll be dropping by the odd servo for a sanga. At least that’s the plan.

But I’m equally prone to utter such terms as no-brainer, go figure, guy for bloke, or yada-yada. Not that there’s wrong with that – or the other. Can’t the two coexist? Of course they bloody can, but which linguistic way do you lean – and what are your own pet dialects?