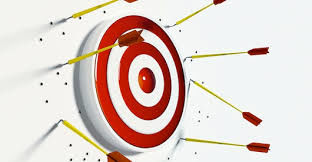 There's a Facebook group called TARGETISM which wangles the daily Target puzzle. The game is to ignore MOUSTACHE, if that's the intended answer, and offer a surreal alternative, with its own definition.

ACME SHOUT, say, is a yodel. While OUCH TEAMS are rugby squads, just as MOUSE CHAT is eek-speak. Beware: the game is as silly as it is addictive.

Bruce Ashley, who hosts the site, sent me some of the recent smile-worthies:

I FLY ERECT - you can't keep a good man down

As you can see, you own the licence to coin a word, or fudge a phrase of any word count. The art lies in combining a fresh find with a comical definition.

Your Friday Folly is a two-parter in fact, where you can seek the genuine 9s in each mix below, as well contriving an alternative. Get cocktailing.

Who will prove the GEM ARTIST of TARGETISM?