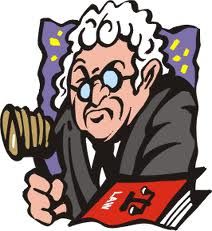 All rise. The judge has reached his decision, and it’s comprehensive. Astounding in fact, since Loroso has gone to lavish lengths to pass notes on each and every of our 31 submitted clues. I felt dizzy on seeing the depth in his email’s attachment, an eight-page document that joked and poked and remarked on every entry. Though these notes came without a name I hereby declare this document as The Loroso Report.

So wise are the insights, and fascinating the arguments, that I propose to parcel out the report across this week, instead of our customary Storm. In fact I predict The Loroso Report will generate its own fierce discussions, promising a lively forum in lieu of our usual think-tank.

Enjoy the installments, with the Open’s eventual winners being declared in the final Post. This morning we open with Loroso’s frame-setting intro:

What a fascinating exercise this was! I was very honoured that DA should entrust this judging job to someone born and raised on the British cryptic crossword model, and slightly nervous too. It felt like a sudden plunge into an unfamiliar world – English is spoken in many countries, but even in those where it’s the first language it has a different flavour to that used on this tiny island.

And, of course, if we want to get all technical we can add that the British cryptic crossword has a style of its own which has never really been fully exported; it’s just the basic concepts which have made their way overseas. I believe this is a very good thing. In America, Canada, India and – yes, crikey – even Australia they present cryptics in their own style and to match their cultures, and it would be a pretty dull world if we all did things in the same, strictly controlled way.

So I’ve approached this clue evaluation exercise with as open a mind as possible. It’s no use bleating on about “Ooh, nice concept, but it’s not very Ximenean” – those strictures apply far more to the UK than elsewhere, but many British cryptics allow their setters to go a bit wild anyway, so what’s the point in banging the Ximenes drum? For what it’s worth, when setting as Anax or Loroso I try to obey the laws of grammar and syntax; but if I ever feel those rules (when very strictly applied) might spoil an otherwise spanking clue I’m often tempted to submit the puzzle and just wait to see if the naughty bits are picked up by the editor and changes requested.

Outside setting, I run a weekly clue-writing forum called DIY COW (Do-It-Yourself Clue of the Week) whose membership seems roughly equally split between the UK and India, and in the submitted clues it’s easy to see how approaches differ. So, as I said, judging your clues is done with a very open mind. If you’ll permit me, where appropriate I’ll try to highlight areas where clues wouldn’t be acceptable to a typical UK audience, but mostly these comments will be restricted to areas where I think there are genuine faults which could render a clue unfair or inaccurate. Enough blather – let’s play.

Tomorrow, Loroso goes from AMPSTER to BOGART. Care to place a wager on the winning three clues before the commentary gets cracking?