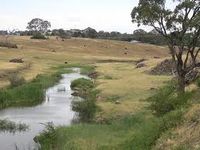 Almost a century ago, back in 1913, Canberra was a sprawl of turf and stringy gums on the Molonglo River, not a flagpole in cooee. Yet forefathers had earmarked the patch to be our nation’s new capital, if only to stop the two major states from brawling. As for a name, Canberra was suggested – the local word for meeting place.

But why stop there? Imagine every state and territory capital is in the market for a new name, Canberra included. What are your suggestions? Perhaps Sydney could be badged as Gridlock, or Allaboutaview, and Melbourne could cop Etagton, or Caffeinia. As for Canberra, seems Abbottabad is already bagsed.

But let’s get toponymic for a tick. Give us your ideas, and I’ll forward the best to the appropriate authorities. Six state capitals, and two territory towns, adds up to eight possible trophies, with an overall winner declared by week’s end. Deadline to observe is your civic duty is Thursday moonrise. So why wait? Nominate.