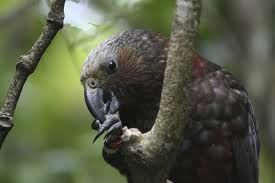 This week was the battle of the Big Three – Mr X, SK and Boniface. At least the heavy hitters when cryptic clues need crafting. (Or that’s the gene pool for now, though all of us are mutating nicely, and let’s not forget that JT stole the lollies in our last clue-down.)

But for this Storm, the triumvirate divide the spoils, with only Sam snitching a crumb off the table. While I encouraged clues for other gnarlies, I couldn’t pinpoint any zingers worthy of a stadium ole. (Brave as the bids were – )

So when it came to the Dirty Dozen awaiting wordplay, this was how the medals were distributed:

Anna Kournikova: A star admits ruin – an OK kill [Boniface – seeing A NOVA as a holder was a clincher.]

Famke Janssen: Superhero celebrity has knockback in mid-summer, hands back cape [Mr X – sneaky use of celebrity, with a deft resonance of cape.]

Franz Kafka: Far out NZ parrot eats forefinger [Boniface – and the kaka is a Kiwi parrot too, with a mean beak – pictured above. A neat click.]

Friedrich Nietzsche: Sunburnt while swimming, hence zits flared up [SK enters the fray with a sublime surface, and a timely warning to all beachgoers.]

John Malkovich: Can drunk Victorian be engrossed in match ends? [Does Boniface capture Bay 13, or what?]

Mia Wasikowska: Inside “Toorak’s Wok” I saw aimless backpackers [Imagine SK’s nerve, attempting a Hidden formula with a name like Mia’s – and succeeding.]

Novak Djokovic: Star takes drug to void Jock upset [Boniface at his most brilliant, in the wake of Andy’s towelling.]

Zach Galifianiakis: By last account, his possessions are a failing career and a kickback [Cruel, X, but cleanly engineered. A fine clue.]

Next week, a step away from the clue-forge, timing our Brainstorm with a different storm up north. Look for the cataclysm next Tuesday. Well clued all comrades, and congratz to Boniface (5 clues), Mr X (4), SK (3) and Sam for their gilt on the honour board – and all dabblers for daring The Unclueables.